How Scaffolding Led to Stories from Around the World

As described in our recent post, The Cincinnati Reds, Scaffolding and the Windy City, a chance sighting of scaffolding atop the Tribune Tower in Chicago launched us on a quick tour involving construction and renovation projects around the Windy City. This led us to a viewing of the new Apple store, a structure that was clearly obvious as scaffolding surrounded it yet is nearly invisible in its completed state. It also took us to Wrigley Field, and projects that bring the historical ballpark into the modern age while retaining its nostalgia for breezy, but warm summer daytime baseball and where the aromas of hotdogs and popcorn drift perpetually, even through the off-seasons.

In that post, I mentioned that there was more to the Tribune Tower story. It’s a building of 36 floors, but many more “stories”, in terms of narratives. In that regard, it has at least 151 stories to tell. A current one is about renovation and renewal. Since it opened in 1925, the tower has housed offices of the Chicago Tribune of course, as well as another Chicago media mainstay, WGN. Both the Trib and WGN moved to new locations in 2018, and the Tribune Tower will soon house 163 residential condominiums. 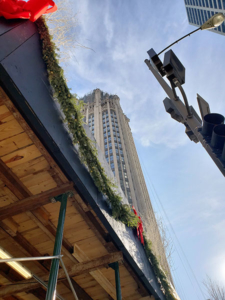 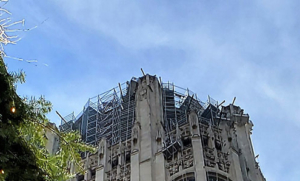 Yet, the Tribune Tower houses roughly another 150 or so stories. The stories are largely independent of each other and they span 3.4 billion years. Yet, common threads tie them through geological and human history.

This collection is mind-bending. Rocks and relics that date back millions of years, from places thousands of miles apart have all found common ground in a building in Chicago.

If the earthbound stories represented aren’t enough to instill awe, the Tribune Tower hosted for a time a rock that is 3.4 billion – yes, BILLION years old: one collected from the moon during the Apollo 15 mission. This lunar rock was on loan from NASA, and on display at the Tribune Tower in commemoration of the 30th anniversary of the first lunar landing in 1969.

Over 3.4 billion years, a lot of stories have been created – and here’s yet another brand-new year right in front of us!

In the context of all that time, the next 12 months ahead of us may seem microscopic. But monumental stories, in both private and public realms, can develop in a matter of a second.

What stories will each of us create as we progress day-by-day through the upcoming year? The Tribune Tower bears dozens of stories on its very walls. The publications and broadcasts it’s released have issued thousands more to vast audiences. Yet, individual people are behind each and every story in one way or another.

If you were building a tower, what stories would you present on it from your experiences through past years? Family events? Artifacts from interesting places? Tokens of meaningful achievements or a troubled time? What experiences would you like the new year to bring, and what memories could these add to your tower?

It’s amazing what a chance glance at scaffolding atop the Tribune Tower can lead to. Somehow it seems fitting. In its most utilitarian way, scaffolding creates a platform that can lift us ever higher. Hopefully, the stories we learn about and create serve to keep lifting us to greater heights as well.

The Cincinnati Reds, Scaffolding and the Windy City

NOT for the Job Site: Free Solo
Scroll to top