From Beacon to Beacon, with a Side of Scaffolding

American Scaffolding began a virtual road trip this summer, inspired in part by the recently released book, Don’t Make Me Pull Over.

Our July stop at the in Washington, D.C. featured the Lincoln Memorial, that immense tribute to a man who, like the monument, was larger than life in so many ways. More than 150 years after his service to the country and his death, Lincoln stands as a beacon of inspiration to many people because of his virtues and accomplishments.

The next stop on our Virtual Summer Road Trip took us to the Outer Banks, where we appreciated an entirely different type of beacon: the steadfast signal of refuge in the storm, the lighthouse.

Intent as we are about virtually visiting sites with a construction or renovation story involving scaffolding, our GPS maps ought to show highways laid out as a system standards, ledgers and transoms!

When we encountered this video during our trip planning, Bodie Island Lighthouse, and saw the role scaffolding had in the story of its 2011 renovation, we knew it was worth a stop. 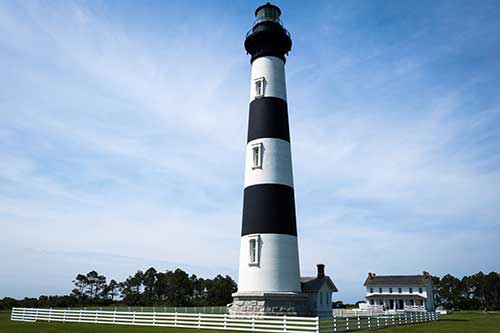 True, scaffolding doesn’t make an entrance in this video until minute six, but it is at this point that the narrator acknowledges this is where the “serious restoration begins”.   With this, we can proudly know projects get “serious” when the scaffolding is built. In this case, “serious” came after the lowering of the fragile and rare Frensel lens , by cable, down the center of the lighthouse tower.

Serious, indeed. Over 2,000 pieces of scaffolding were assembled over a course of 45 days for this project.

The story of the restoration work that scaffolding supported at the Bodie Island lighthouse opened our eyes to history – both natural and U.S. – that we hadn’t considered before. First, time seems to take on new meaning, when considering that the Bodie Island light had shined steadily for nearly 140 years. The lighthouse first began operating in 1872, and did so day after day, year after year, until 2011, when restoration began.

The current structure is actually the third Bodie Island lighthouse. The first, built in 1848, was a quick victim to the unstable soil of the island. This is the natural history lesson of our trip. The Outer Banks, unlike most islands, they are not anchored to the sea floor on rock foundations; they are made entirely of sand. The original Bodie Island light structure settled unevenly and by 1858, was beyond repair.

A second light was built and operating by 1859. Destroyed during the Civil War it was a victim to Confederate troops, rather than nature. It seems somewhat unreal that the existing light also looked over wartime activity. Several German U-Boats are among the innumerable shipwrecks around the Outer Banks. A U-85 rest just 15 miles out from the Bodie Island lighthouse, about 100 feet below the surface. 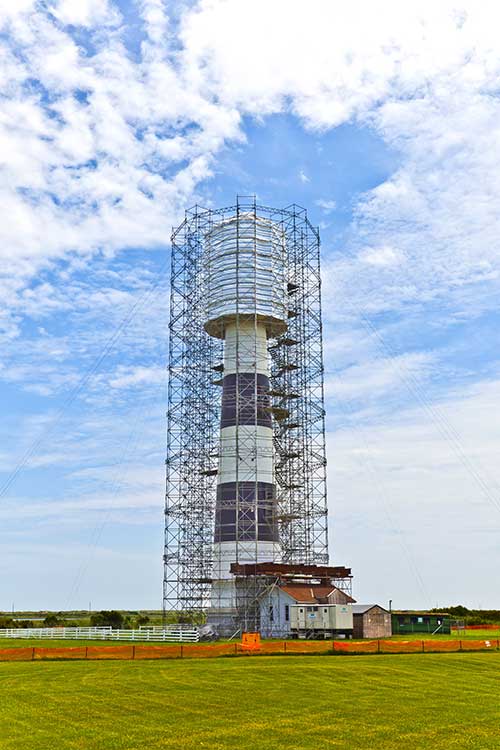 Given the age of United States lighthouses, it’s tempting to plot our virtual tour based on interesting renovations of these “sentinels of the sea”. As we explored the Bodie Island light, we learned of the renovation of the St. Augustine lighthouse. Who knows? Perhaps we’ll see you in Florida next month?

And, by the way, speaking of lighthouse-related scaffolding projects, did you know the Statue of Liberty operated as a lighthouse? For 16 years, from 1886 to 1902, Liberty’s beacon shone not only as the light of freedom, but as a guide to the New York Harbor. 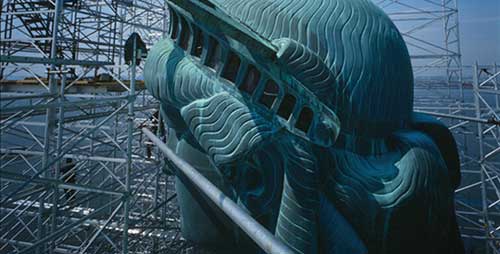 So, where to head next on our Eastern U.S. virtual roadtrip? North to New York or South to Florida? Stay tuned! As we scout out interesting scaffolding projects, all kinds of destinations can appear.

The Cincinnati Reds, Scaffolding and the Windy City
Scroll to top