With summer well underway, it’s fitting that a nostalgic look back at the family road trip is the focus of a newly released book, Don’t Make Me Pull Over. It’s conveniently well-timed for our summer blog series on notable places to visit. “Notable” for us, I admit, in that each has a scaffolding-related story.

This summer series was inspired, at least in part, by a recent post by Avontus, a company dedicated to software development for the scaffolding and formwork industry. Their post, Scaffolding Estimates for Top Buildings Around the World, launched on an armchair tour of at least a FEW buildings around the world, beginning with the White House and the Lincoln Memorial in Washington, D.C. 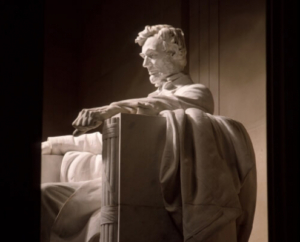 It also seems like a convenient coincidence that a new multi-year renovation project on the Lincoln Memorial began this year. According to the Washington Post, it’s a $25 million project that will repair damage caused by everything from anti-aircraft fire inflicted in 1942 to the 5.8M earthquake centered northwest of Richmond, VA in 2011. No question: scaffolding IS involved!

If the reality of this repair work were to encompass the entire Lincoln Memorial as pondered by Avontus, over 38,000 pieces of scaffolding weighing in at nearly 923,000 pounds would be called in to service. Given that this project is recognized as the “biggest overhaul of the building since the structure was dedicated 96 years ago”, is it possible the scaffolding requirements will reach this magnitude?

Although the Lincoln Memorial was completed and dedicated in 1922, the story of its development goes back to 1867, two years after President Lincoln was assassinated. It was in 1867 that Congress established the Lincoln Monument Association, which was charged with the tasks of raising the money and developing plans for the Lincoln Memorial.

The wording of the Act of Congress incorporating the Lincoln Monument Association is quite inspiring. It conveys respect and admiration for President Lincoln that would be expected. Moreover, it reflects a certain fondness that seems, in this day and age, surprising for a Congressional document. Here’s the opening text as the Act was written:

“The loyal people of the United States of all classes, without distinction as to raee or color, fteling an admiration and gratitude for the patriotism, services, and noble character of Abraham Lincoln* late President of the United Stiites, who fell a martyr to the cause of Liberty and Humanity, have for some time been desirous of expressing their appreciation of his noble services and sublime character in a manner worthy of the American name, and which would commemorate in the most fitting way the great charter of Emancipation and Liberty in our land. In order to make ejftectual such a desire, Congress passed a law, which was approved by the President, incorporating the *’ National Lincoln Monument Association,” whose duty it should be under a proper organization, with rules and regulations, to proceed to collect funds and make all necessary plans and arrangements to erect a suitable monument to that great and good man somewhere within the public grounds in the ( ‘ity of Washington.”

Quite a tribute, even before the memorial was built. Long before, in fact. It was 1901 before the site was selected for the Lincoln Memorial and another 10 years before funding in the amount of $2 million was released to begin construction.

And how much scaffolding did that $2 million budget buy? 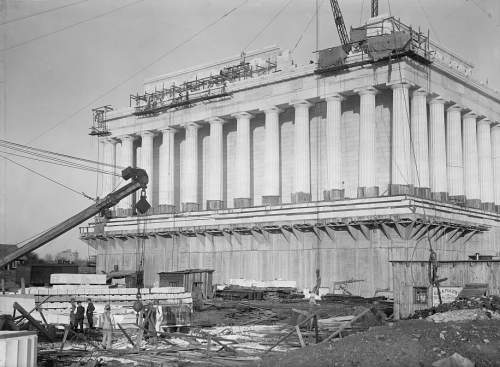 Hard to say exactly, but this picture suggests that it wasn’t as much as the Avontus post envisions for wrapping the entire monument in scaffolding. It also shows industrial wire rope at work at the construction site! But, our sister company will be telling its own tale this month of a virtual road trip to a historical site.

With a major phase of construction underway on the Lincoln Memorial, I have to confess, it is tempting indeed to load up the car and head off for Washington to see the project – and all the scaffolding involved – in person!

From Beacon to Beacon, with a Side of Scaffolding
Scroll to top