Just a little over a month ago, Cincinnati was still seeing snowfall. Now, summer and the vacations that accompany it are on our doorstep.

So many options exist for places to go, but history is on our mind, given the role American Scaffolding has been playing in the renovation of Cincinnati’s Union Terminal.

Nationally, WorldAtlas suggests historic sites as diverse as New York City’s City Hall to The Old Mill in Little Rock, Arkansas. At the top of the WorldAtlas list is Union Station in Los Angeles, so we’re wondering what it will take to get our own Union Terminal on the list!

Cincinnati’s Union Terminal has a few things in common with the Los Angeles train station. Obviously, they both support passenger train service. From a construction perspective, both were built in the 1930’s, and both boast opulent Art Deco design. 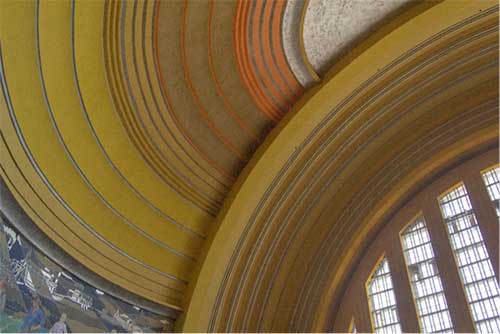 No question that Union Terminal has a huge place in history. As a transportation hub, the terminal welcomed soldiers returning home from World War II, and also served victims of that global conflict, Holocaust survivors seeking a new home in the United States.

From a building and construction standpoint, it also stands out in history. Art Deco train stations were constructed from Philadelphia to Buffalo to Cincinnati, Omaha and Los Angeles to name a few.

While Buffalo’s once humming Central Terminal has been sitting vacant and unused since 1979 when the last Lake Shore Limited train left, heading west, Cincinnati’s Union Terminal is currently operating, serving Amtrak customers heading for Chicago and Washington, D.C. Union Terminal has also been home to the Cincinnati Museum Center since 1990.

Union Terminal is loved by the Cincinnati community and surrounding region and it has been actively-used over recent years. It’s notable for housing the second largest half dome in the world, with a rotunda that spans 180 feet and rises 106. This breath-taking structure features glass mosaic murals that depict scenes from Cincinnati and U.S. history.

And, the building has suffered the wear and tear of time, water damage and…gravity. It’s two-years into a restoration project that will give it continued life. Total projected renovation costs of $213 million compare to approximately $41 million spent to build it originally, a testament to the special place it has in not only the hearts of Cincinnatians, but in transportation and art history as well as Ohio and United States history.

The role American Scaffolding has played in the building’s renovation seems like a modest one, providing scaffolding that raises workers to great heights both inside the building and out. This isn’t simply another construction job; it’s restoring a piece of art and revitalizing a piece of history. 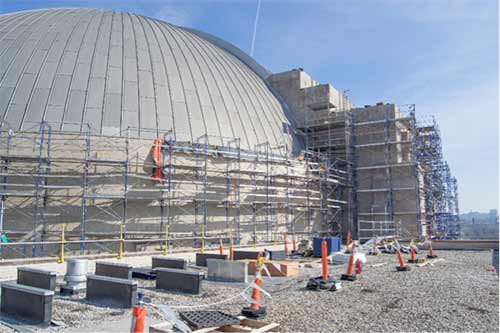 Almost like the trains that connected the coasts at one time, this is work that connects people over time, from the first passengers in 1933 to those still to ride trains for years to come, as well as students and visitors who learn history going back to the retreat of glaciers that reached down to Cincinnati in the last ice age. There’s a whole lot of history still to be made, and American Scaffolding is honored to have played a part in sustaining this venue that will live on to tell its story.